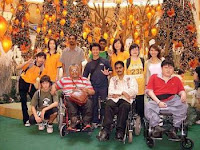 Having a good time: Thanasayan (second left) and Independent Living and Training Centre president Francis Siva (third left) with their other friends at the Cititel Mid Valley.

Hotel fetes 60 disabled people to a nice meal
About 60 people with disabilities from blindness, deafness and the wheelchair-bound were treated to a scrumptious lunch at Citi Cafe in Cititel Mid Valley and a tour of Gardens Galleria before heading for a shopping spree at Mid Valley Megamall.

The event jointly hosted by Cititel Mid Valley and Boulevard Hotel Mid Valley and organised by Malaysia Animal-Assisted Therapy for the Disabled and Elderly (PetPositive), also had groups from different organisations which dealt with the blind, deaf and those with Parkinson’s Disease.

PetPositive president Anthony Sivabalan Thanasayan said that almost everyone in the group had never stepped into a public place, let alone dine in a hotel or shop in a mall.

“This is an opportunity for them to help blend with the public,” he said.

He added that it was always nice and refreshing to see members of the group share their ideas among themselves.
Posted by ILTC MALAYSIA at Wednesday, December 26, 2007