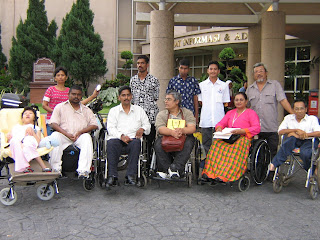 Malaysiakini: FORM SPECIAL COUNCILS ON VULNERABLE GROUPS SAY PETPOSITIVE
The opposition-controlled state governments must form special councils to look into the needs of the disabled and elderly.
Petpositive president Anthony Thanasayan said the winds of change which swept across the 12th general election must also include vulnerable groups.
Speaking to Malaysiakini today, he said the new elected representatives from the opposition must not forget the disabled.
"While I am happy to see the formation of new state governments, I am also concerned that we (vulnerable groups) would be reduced to mere tokens again," added the 47-year-old wheelchair-bound activist.
He said the new leaders lacked the experience in working with vulnerable groups and therefore feedback on the many issues affecting them is vital.
Thanasayan said the council must include leaders from vulnerable groups in order for it to be effective.
"These new leaders must meet with us to familiarise themselves with our problems. We should be the first group that they meet," he added.
Significant changes needed Thanasayan also said that the disabled and elderly also want to see significant changes in these states.
Citing Petaling Jaya as an example, he stressed that the city must be made more accessible.
"Over the next five years, we would like to see significant changes. A total transformation, including access to local councils and the elected representatives," he added.
Thanasayan also suggested that a hotline be created to allow vulnerable groups to have direct contact with the elected representatives.
"These representatives must also visit us on a regular basis to collect our feedback on the issues affecting us," he said. One of their problems, Thanasayan pointed out, was healthcare.
"While treatment is free, more often than not, government hospitals do not have the medication we need and we are forced to buy them outside.
"These medication are expensive and something must be done about this like allowing us to make claims," he said. Apart from this, Thanasayan also called for all disabled parking lots to be made free of charge.
He also wants to seek an appointment with the new Selangor menteri besar to explain to him the
crucial role that animals play in assisting vulnerable groups.
"For example, MBPJ (Petaling Jaya City Council) does not give free dog licences. We also want to see the negative perception surrounding dogs change, especially in local councils and awareness on this must be inculcated," he said.
Posted by ILTC MALAYSIA at Friday, March 14, 2008

ant. i think more disable should use your blog to voice out what they need with out fear this will make our plea for improvement for the disable better.It is only you and me that are asking, all should ask.