Wednesday January 7, 2009
MPS blitz on bungalow hotel
Story and photo by STUART MICHAEL
THE Selayang Municipal Council (MPS) has slapped a RM12,500 fine on the owner of a bungalow in Bandar Country Homes in Rawang for using it as a hotel since August last year.
The owner has been ordered to stop operations with immediate effect. 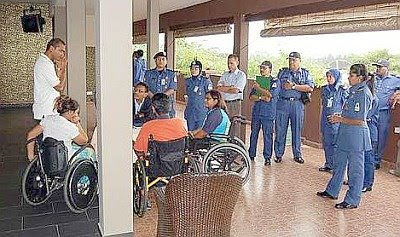 Discussion: Gurdip Kaur (right and in a wheelchair) with the owner of the bungalow and MPS enforcement officers.

The bungalow hotel is located in a residential area in Phase Six, Bandar Country Homes.

StarMetro had reported on Dec 24 that the mini hotel had 10 rooms for rent. The operator had placed an advertisement on the Internet inviting guests to book rooms.

According to MPS Safety and Enforcement director Ahmad Faisal Badiuzaman, the owner has been told to stop operations immediately or else the council will take sterner action like sealing the place.

The owner, who is disabled, pleaded with the enforcement officers to give her time to get things organised.

MPS councillor Gurdip Kaur, who was at the scene, told the MPS enforcement officers to give the owner some time.

“Since the owner is a disabled person, we will give her about three months. However, she is not above the law and must abide by it,” she said.

“The owner said that she is applying for government permission to convert the premises to a home-stay unit,’’ Gurdip said.
Posted by ILTC MALAYSIA at Wednesday, January 07, 2009