Against all odds
By WONG LI ZA

Jessica Cox inspires audiences around the world with her spunk and indomitable spirit.

JESSICA Cox is a superwoman of sorts. She may not be saving victims from burning buildings, but she is a heroine in the hearts of many. 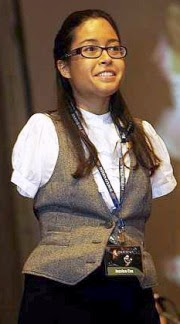 Born without arms, Cox used to watch with envy as other kids swung about on the monkey bars in elementary school while she was limited to the swings.

Frustrated, she would envision herself flying over the playground like Superwoman while everyone watched in disbelief. “I would imagine taking people up one at a time to experience my super powers. Years later, I realised that my imagination had become a reality,” said Cox at a media interview.

"It’s only human to have low moments in life because if you don’t, then you won’t feel the high, exciting times"- JESSICA COX

Cox, 26, is the first woman pilot in aviation history to fly without arms. She was invited to Kuala Lumpur recently to speak at the Women of Independence Conference organised by Intelligence Business Networks.

The two-day conference, to commemorate International Women’s Day, gathered successful women from all over the world, who are leaders in their respective fields.

Wearing dark-rimmed glasses and a grey vest over white blouse, Cox was a petite picture of confidence as she took to the stage.

The motivational speaker articulately delivered her speech entitled Architecturing Your Destiny – Disarming Fears, sharing about her life growing up and how she overcame various obstacles.

Cox said one of the challenges she faced when she first learnt flying was how to tie the seatbelt in the aircraft.

To demonstrate, she climbed onto a chair that was on stage and slipped down into an attached, pre-buckled seatbelt, immediately drawing warm applause from an awe-inspired audience. 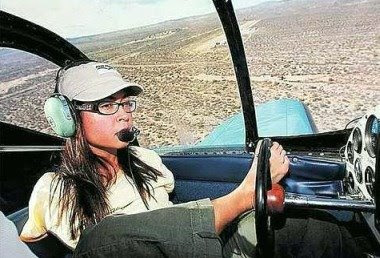 In control: Cox is the first woman pilot in aviation history to fly without arms. She earned her US Federal Aviation Administration sport pilot licence in October last year.

“I may not have arms but that does not determine who I am or who I can become,” she said.

Her favourite quote is one by spiritual teacher Marianne Williamson: “Our deepest fear is not that we are inadequate; it is that we are powerful beyond measure.”

Cox, the middle of three siblings, was born to an American father and a Filipino mother in Tuscon, Arizona.

Doctors could not explain her rare congenital condition as sonogrames and other prenatal tests did not reveal any defect.

However, the spunky lady’s indomitable spirit overrides what she may lack physically.

Standing at a mere 5’ 1” tall (155cm), Cox holds a sport pilot licence, has a double black belt in taekwando and is an active swimmer. (She is the first person without arms to get a black belt in the American Taekwando Association.)

When she first learnt to drive a car, she was encouraged to use special modifications. However, after she had her car modified, she decided to remove the modifications and now holds an unrestricted driver’s licence.

The University of Arizon psychology graduate still draws stares when she pumps petrol at the gas station. She can type 25 words a minute, blow dry her hair, and put on her makeup and contact lenses with as much ease as anyone else.

She earned a US Federal Aviation Administration sport pilot licence last October. (This type of licence does not require a medical examination, only a valid US driver’s licence, an oral and written exam, and a certificate to fly solo.)

Due to airplane logistics, it took Cox three years, instead of the average six months, before she got her licence. It also required four Ercoupe planes (a type of light aircraft originally built without rudder pedals), three certified flight instructors and 89 hours of flight training in three different states.

“When I fly, I have the greatest feeling of freedom, independence and power,” said Cox, who controls the throttle with her left foot and the yoke with her right.

So far, she has clocked in about 130 hours of solo flights, impressive since flying in commercial planes was her greatest fear since childhood. Needless to say, piloting an aircraft was never on her to-do list.

However, that changed when a member of Wright Flight, a Tucson-based non-profit group, approached her after a Rotary Club talk she gave in 2005. The group uses aviation as motivation.

A fighter pilot named Robin Stoddard who represented the group asked if she would like to fly an airplane.

Being the achiever and optimist that she is, Cox decided to give it a try and was instantly hooked.

“Sometimes fear is rooted in a lack of knowledge and the unknown. When I first started flying, I realised my fear was because I did not know much about it.

“A universal fear people have is a fear of inadequacy and lack of faith in ourselves,” said Cox, who also appeared on the Ellen Degeneres Show in December last year.

Confident, poised and ambitious, Cox has come a long way to become who she is today.

Besides being a motivational speaker (details at rightfooted.com), she has also been mentoring children with the International Child Amputee Network for the past five years.

However, getting to this stage in her life was not an overnight process, nor a walk in the park.

When she was young, she often got angry, kicking and screaming in her tantrums.

“As a child, there was no way to understand why I did not have arms like everyone else. It was difficult being different,” said Cox, her voice softening.

Nevertheless, she still took part in various activities such as gymnastics and tap dancing, often performing on stage.

She wore prosthetic arms from the ages of three to 14, but hated them and was more comfortable using her feet.

“In fact, I often wished the prosthetic arms would break so I wouldn’t have to use them!” said Cox with a chuckle.

On her first day of eighth grade, she finally decided to take off her prosthetics before boarding the school bus. “As the bus door closed behind me, I felt freer and independent. Since that day, I never wore the prosthetics again.”

For Cox, the greater challenge of being born without arms is the constant stares rather than the physical adversity.

“I used to get very irritated when people stared, especially when I’m walking down the street or eating with my feet. But I’ve learnt to turn that into something positive and use that opportunity to channel positive vibes and be an example of optimism.

“Accepting myself is an ongoing journey. It’s difficult to keep your spirits up all the time but I rely on my faith to carry me through the rough times.

“It’s only human to have low moments in life because if you don’t, then you won’t feel the high, exciting times.”

Cox credits her parents for being her role models and pillar of support. Her mother is a nurse and her father, a retired music teacher.

“My mum left the Philippines and came to the States without knowing anyone here when she was 22. She is my role model and always tells me I can do anything I’ve set my mind to.

“My dad never once shed a tear when I was born because he did not see me as a victim. It is hard being a parent to a disabled child. He was my rock during the difficult times and that has shaped me into the person I am today,” she said.

At the moment, there are two things that Cox is still trying to achieve – how to tie her hair into a ponytail and do rock climbing, although she can water ski and snow ski.

She also hopes to get certified as a pilot instructor and teach people with disabilities.

“Once you have a taste of something so great, you want to share it with everyone.”

At present, Cox is not seeing anyone but she has no intention of jumping into just any relationship.

“One good thing about not having arms is I can filter out a guy who is superficial and someone who is genuine. If a guy can really see me for who I am despite how I might look, then he is really worth pursuing,” she said.

Eventually, Cox hopes to get married and have kids. “I know it will be difficult to have a family but I know I am going to be a good mum. I don’t think I will be limited in being that and things like carrying the baby will come naturally.”

Her mother, who was also at the conference, said the word “disability” is alien to her daughter, just as alien as having upper limbs would be.

“This is just to show that there’s always more than one way to accomplish a task.
Posted by ILTC MALAYSIA at Wednesday, March 25, 2009