THE prayers of many charity organisations were answered recently when Genting (M) Berhad donated RM450,000 to 45 organisations.

The Festive Season Contribution ceremony was held in conjunction with Genting Group’s 45th anniversary and the Chinese New Year celebration at Wisma Genting in Kuala Lumpur.

The ceremony was attended by representatives of the organisations, including orphanages, welfare homes and training centres for the disabled. 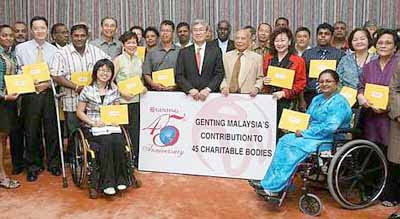 Starting the year with kindness: Lee (standing sixth from right) and Genting Berhad executive director Tan Sri Mohd Amin Osman with representatives of 45 charitable organisations
Genting president and chief operating officer Datuk Lee Choong Yan said: “Challenges faced by the society should not be borne by the nation or government alone.”
Lee believes the current challenging economic situation makes it even more crucial for corporations to help uplift the poor.
Nancy Clemons, who is co-founder of Trinity Children’s Home, described the donation as “God’s gift” especially during the beginning of the year when they were hard-pressed for funds for the children’s schooling expenses.
Datuk Dr Lam Peng Chong of the Spastic Children’s Association of Selangor & Federal Territory said he was glad to receive the donation.
“With this fund, we hope to increase therapy sessions as a way to empower our younger charges,” Dr Lam said.
Posted by ILTC MALAYSIA at Saturday, February 20, 2010