Suffering from growth disorder, the youth with Russell-Silver Syndrome barely weighs 25kg and is less than a metre tall.

In addition to being both speech and hearing impaired, Avinesh, who is born with only one kidney, has hypertension and had undergone several surgeries since birth. 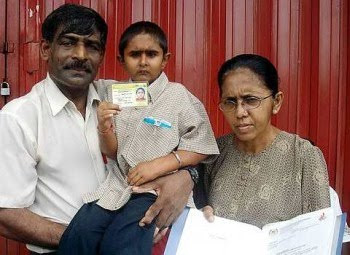 And, despite being inflicted with these ailments, he has been denied aid by the state Welfare Department.

“I was told that they would look into my son’s appeal but nothing positive came out of it,” said single mother J. Premjit Kaur, 53, who suffers from asthma and psychiatric problems.

Premjit’s sister, Nirmal Kaur, 49, said their siblings had got together to provide help to the family for the time being.

“I was shocked when a department officer told me that since Premjit was already getting RM100 in aid, her son was not eligible,” she said, adding that she first submitted an application for Avinesh in 2004.

Her nephew, she said, was also required to go to Universiti Malaya Medical Centre regularly for check-ups.

“Both mother and son are in genuine need of aid,” added Nirmal.

Rahang assemblyman K. Arumugam said the department should have a standard set of rules when it came to approving aid.

“I was told that the department will give RM300 to a disabled person, who is gainfully employed and earning RM1,000 and above. Those earning less will get RM200.

“But what about people who are unable to work at all?” he asked
Posted by ILTC MALAYSIA at Tuesday, April 13, 2010

Is this the 1 Malaysia concept. People come first. Help is need for the less fortunate here at our door step but many needy are not getting it. Are they not Malaysian