MRT gets thumbs down from disability rights activists 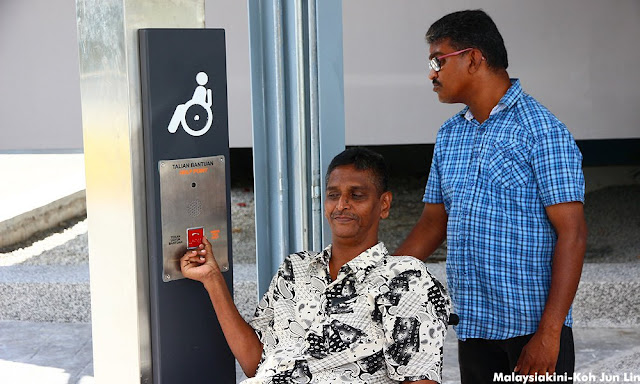 Several activists for the rights of the disabled have given the thumbs down on the accessibility for facilities in the newly-opened Mass Rapid Transit (MRT) line.
NGO Petpositive’s president Anthony Thanasayan said that while the MRT facilities for disabled people were slightly better compared to other rail facilities in the Klang Valley, the situation was still a disappointment.
Overall, he said, he would rate MRT 70 out of 100 points and added it was not good enough to worth his trouble to use it in its current state. 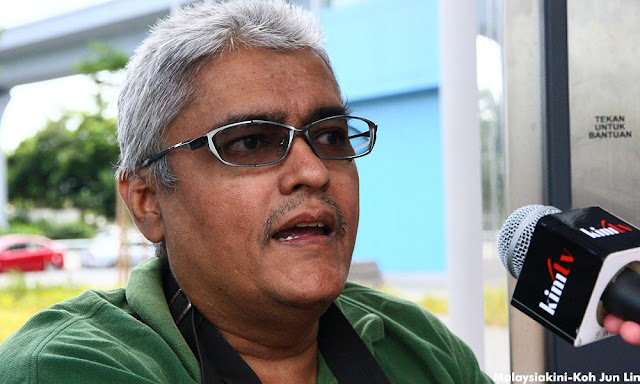 “I thought that after all the talks and sessions that we have had, and the awareness we have created over the past five, 10, even 15 or 20 years, they wouldn’t be struggling with basic issues like this.
“It clearly shows that they didn’t do their homework. That stands out very strongly. They just thought that if they followed something from a book, they would be okay.
“By right, they should have called many people to come out here to test out the facilities and be willing to make changes where necessary,” Anthony told Malaysiakini on Wednesday.
Earlier that day, he and Independent Living and Training Centre Malaysia (ILTC) president G Francis Siva and ILTC secretary Gurdip Kaur took a ride from the Taman Tun Dr Ismail (TTDI) MRT station to Sungai Buloh and back, and made a brief stop at the Kota Damansara station.
They were testing to see whether the stations and the MRT trains were accessible to people with physical disabilities...


A Malaysiakini team which accompanied them was barred by Prasarana Malaysia Bhd staff from taking any video recording and photograph on grounds that the journalists had not applied for permission from the MRT operator.

The disability rights activists met with difficulties from the moment they arrived at the TTDI station. The two parking spaces reserved for disabled people were occupied by three cars, none of which displayed a disability parking permit.

A similar situation was found when the group arrived at the Sungai Buloh station - there were 10 parking spaces reserved for people with disabilities but the spots were taken up by 16 cars.

Again, none of the cars had a disability parking permit. Instead, one of the cars carried a plaque purporting the owner to be the holder of the Darjah Indera Mahkota Pahang, which carries the ‘Datuk’ title.

Anthony railed against the lack of enforcement at the parking lot and asked why the station staff were more preoccupied with telling off the media personnel instead of addressing their complaints about the disabled parking space.

“They may have policies (about media coverage), but here we are - disabled people are being abused at the car park. They are not interested in us.

“They seemed to be more interested in their public image,” he lamented.

During the group’s visit, some of the issues highlighted include the lack of audio cues in the station’s lifts, although tactile pavement outside the lifts guide the visually impaired to the lifts instead of the escalators.

In addition, some gates at the station platform feature a blue wheelchair logo. However, the location of these gates does not correspond with where the trains’ wheelchair areas are located.

Meanwhile, Francis took issue with the sizable gap between the station platform and the train, which he said is dangerous for wheelchair users.

“Overall, I’m so excited to see the MRT but it still needs to be improved,” he said.

As for Gurdip, who expressed disappointment with her experience with MRT, said the staff apparently lacked training in handling the needs of people with disabilities.

The castor wheel of her wheelchair fell through the gap between the station and the platform as a station staff was helping her to alight the train at the Kota Damansara station.

“Why don’t they train the staff to bring disabled people out by turning them (wheelchairs) around and coming out (backwards)?

“That’s very important. We don’t want to have a second injury in our lives,” Gurdip said.

The rear wheels of most wheelchairs are significantly larger than the front wheels, making it less likely to fall through gaps.

Malaysiakini has contacted Prasarana on the group’s feedback on Wednesday and is awaiting a response.

The Phase One of the MRT line opened on Dec 16, running from Sungai Buloh to Semantan. The rest of the line, to Kajang, is expected to open in July next year.