Disabled man turns to loan sharks after losing his stall

Disabled man turns to loan sharks after losing his stall

With no other way to support his family, Murugan Raju is struggling to repay his debt amid threats from 'ah long'. 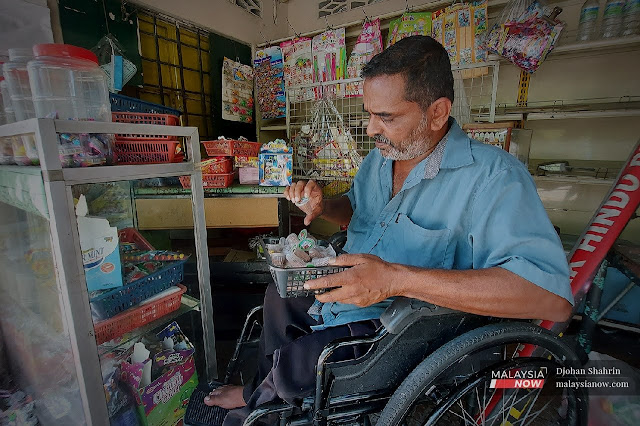 Murugan Raju checks through a basket of jelly puddings, one in a list of goods that have been
damaged since he was forced to close his kiosk in Rawang, Selangor, a year ago.

Despite his status as a special needs person or OKU, Murugan Raju used to run a kiosk selling snacks and sweets near SK Rawang in Selangor. Now, though, he has lost his stall and is in debt to loan sharks to the tune of RM10,000.

Murugan, 50, was aware of the risk involved when he took out the loan. But he had no choice as he has four children, one of whom also has OKU status.

He was told that he could no longer run his kiosk as it would be in the way of a project to expand the road. Local authorities also rejected his application to renew his business licence.

That was a year ago.

Now, he and his family depend on handouts from the welfare department which gives them RM450 each month.

Murugan had tried appealing to the Selayang Municipal Council (MPS) for permission to continue his business until the project begins.

“I need that kiosk. It was our only source of income for the whole family,” he told Malaysianow.

“We asked for assistance to be given a new location to run the business, but until today we have not received any response.” 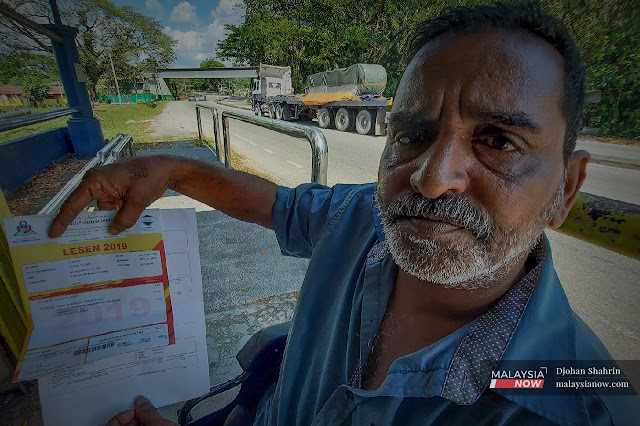 Murugan Raju holds up his expired business licence which he has been trying without success to renew.
MPS licensing department director Zulaina Abu Talib said Murugan had been unable to renew his business licence due to the road widening project.

“If he wants to reapply, he can identify a business location and then submit an application for a licence,” she told MalaysiaNow.

Unable to continue running his business, Murugan chalked up losses of up to RM2,000 from damage to the goods he could no longer sell.

His wife Theivanai Vellithan, 42, is unemployed and his 24-year-old daughter still needs her family’s support as she has learning difficulties.

Lacking the money to provide for his wife and children, Murugan turned to loan sharks or “ah long”.

“I was once under such pressure that I thought it would be better to die than to continue suffering like that,” he said with tears in his eyes.

“If I didn’t take that loan, how would I provide for my family?” 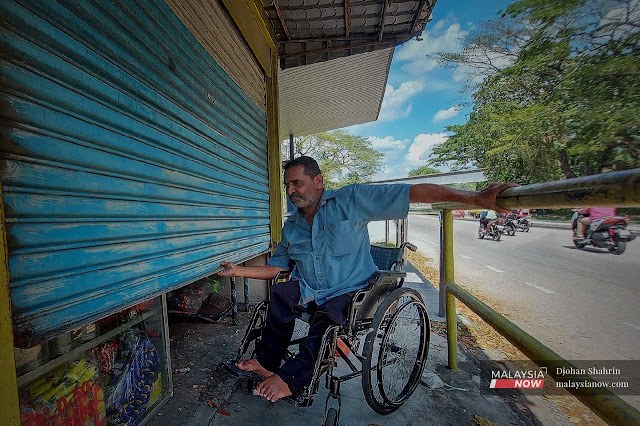 Murugan Raju pulls down the shutters at his kiosk, which was his family’s sole source of income.

Those who borrow from loan sharks run the risk of threats and being roughed up if they are slow in making repayments, something Murugan can now testify to.

“They telephoned, angry because I was behind in my payments. They said if I couldn’t give them one of my daughters, my wife would do,” he told MalaysiaNow.

In an attempt to protect himself and his family, Murugan dipped into his EPF savings, withdrawing RM5,000 under the i-Sinar programme to repay some of his debt.

As he is a member of the Independent Living & Training Centre (ILTC), he also turned to the association for help.

ILTC president Francis Siva said the centre gives skills training and support to about 400 members to live an independent life.

“We offer advice and support as well as assistance in computer skills or anything else they need,” he said.

“We also try to ease the burden of members through contributions of food and daily necessities.”

He voiced hope that more people designated as OKU would register with the centre, adding that they too would continue seeking them out in order to provide assistance.

He estimates that some 600,000 people across the country are designated as OKU but only 124,000 receive help from government agencies.

He said the rest are considered ineligible due to factors such as incomplete forms or the ability to afford a car, refrigerator or Astro TV at home.