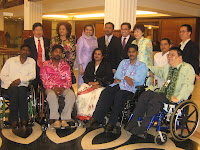 PROVISIONS included in the Persons With Disability Bill 2007 were those which could be implemented for the disabled, Women, Family and Community Development Minister Datuk Seri Shahrizat Abdul Jalil said.

“We do not want to have a bill which is nice to look at but can’t be implemented. This is a realistic bill for the disabled.”

She was replying to points raised during the debate on the bill.

Shahrizat said the Persons With Disability Bill 2007, which was later passed, was the ministry's way to fulfil its pledge to the disabled.

She said the bill took into account the needs in the UN Convention on the Rights of the Disabled and was also in line with the national policies and action plan to ensure that the disabled lived freely and had equal rights.

She said Malaysia would sign the convention in February.

On the issue of compulsory registration of the disabled, Shahrizat said making it compulsory would be a violation of their rights.

“We respect those who do not wish to register. Perhaps one day they will be comfortable with it and then come forward to do so,” she said in encouraging them to do so.

Up to June, a total of 209,208 persons with disability were registered with the Welfare Department.

On punishment for those who breached a disabled person’s rights, Shahrizat said the bill was not punitive in nature.

“There are by-laws which we can use to take action for non-compliance,” she said.

On whether mentally ill patients were included in the bill, Shahrizat said the ministry was still in discussion with Health Ministry over the matter.

Earlier when debating the bill, Wong Nai Chee (BN – Kota Melaka) expressed disappointment that an anti-discrimination law against the disabled was not included.

“I suggest having another bill for the disabled, namely an anti-discrimination bill to protect their rights,” he said.
Posted by ILTC MALAYSIA at Wednesday, December 19, 2007

After reading the disable bill it should be call ABLE BILL 2007 as it got no where the OKU can voice anything. "Wayang kulit"