Show Social Welfare ID to get 50% off on Rapid buses 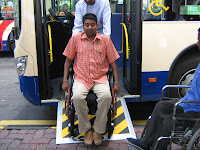 Nation
Saturday February 9, 2008
Show Social Welfare ID to get 50% off on Rapid buses
By K. SUTHAKAR
PENANG: Effective Monday, senior citizens and the disabled registered with the Social Welfare Department need only show the identification cards issued by the department when travelling on Rapid Penang and RapidKL buses to get a 50% discount.
To reduce red tape, the Government has done away with the requirement for them to apply for the Rapid Card, issued by the companies.
“We want to simplify things. It is sufficient for them to show the card issued by the department to obtain the 50% ticket concession,” said Second Finance Minister Tan Sri Nor Mohamed Yakcop.
He was speaking to reporters at the St Nicholas’ Home here on Saturday.
Rapid Penang chief executive officer Azhar Ahmad, who was with him, said it takes about two weeks for the company to process each card application.
He said about 10,000 senior citizens and 400 disabled people travelled daily on Rapid Penang buses.
Nor Mohamed said the problems that prompted the one-day strike by Rapid Penang bus drivers last Monday had been resolved.
“It is a small problem. When there is a problem, we look at it positively and resolve the matter quickly,” he said.
Thousands of bus commuters rushing for work and last-minute Chinese New Year shopping were left stranded on Tuesday when the drivers brought transport to a standstill.
Posted by ILTC MALAYSIA at Monday, February 11, 2008