True love sees beyond the wheelchair 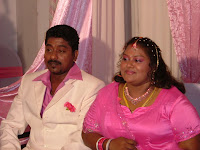 LIKE S. Jeyaraj from Rawang in Selangor, most of us can’t help but eagerly look forward to a new job experience.

Of course, there are all the initial jitters that one has to deal with.

Will your new boss be easy to work with? What about your colleagues? Will you be able to handle the added responsibilities before you?

Although these were all serious questions that Jeyaraj had to answer, the benefits, such as a better salary, far outweighed the worries for the then 27-year-old technician who took on his new position working on an assembly line in Singapore in November 2005.

However, little did he realise that his world would soon come crashing down on him – literally!

“It was the third day of what was supposed to be a very good year for me. I was underneath an eight-ton crane mast to inspect it when it broke loose and fell on me, crushing my spine instantly,” he told me last week.

Jeyaraj was conscious and in excruciating pain throughout the ordeal.

Paramedics rushed him to the National University Hospital (NUH) within half an hour of the incident.

The doctors wasted no time in operating on him. But, only before cautioning him that he only had a 5% chance of getting back on his feet again.

“At that moment, I didn’t think of the 5% part. I just thought that the sooner the surgery was done on me, my chances of recovery would be better,” said Jeyaraj.

However, it did not take long for the young paralysed man to realise that the doctors’ prognosis of his condition had been horribly realised.

“Then, it got worse,” he said, adding that some doctors told him they thought he would be bedridden for the rest of his life.

Who knows? That might have been Jeyaraj’s future. But as fate would have it, he was transferred to Singapore’s Tan Tock Seng hospital (TTSH) two weeks after his surgery at NUH.

For the next three months the healthcare workers at TTSH, who included physiotherapists, rehabilitation experts and even a psychiatrist, helped Jeyaraj put his life back together again, piece by piece.

“I had to learn to do everything all over again,” he said. “They taught me how to sit up in bed, transfer myself to a wheelchair, use the bathroom and even how to climb stairs with my wheelchair.”

To climb stairs, Jeyaraj was taught to sit on the lowest step, then lift himself with the strength of his arms onto the next one with the help of his folded wheelchair by his side for support.

“I didn’t realise how life could change all so suddenly. I recall crying at night sometimes because I felt so weak and helpless and wasn’t ready for this kind of life,” he said.

“Carrying each of my paralysed legs made me feel like a weightlifter – except that I wasn’t in the Olympics and what was happening to me was real!”

Looking back, Jeyaraj said the experience was worth it all thanks to the TTSH staff. Training was from 8am until 5pm on weekdays and 8am to noon on Saturdays.

Although the healthcare workers never gave up on him, they were also very kind, he said.

He recalled an embarrassing incident during his training when an accident occurred in his pants.

“Rather than get angry with me or scold me, my therapist just smiled and took me back to the ward where I was cleaned up and brought back for training,” said Jeyaraj.

The rehabilitation was so thorough that the issue of sexuality was also addressed. I was shown a video on lovemaking where the male was someone in a wheelchair and his female partner was able-bodied.

Within eight months of his devastating accident, Jeyaraj did the impossible – he started to drive again.

Cupid paid him a surprise visit in December last year when he tied the knot with his able-bodied wife whom he has known since 2003.

“It was the best thing that I ever did,” he said.

The wheelchair-user, who is also a young and upcoming disabled activist, works part-time at the Independent Living and Training Centre – a self-help group for disabled persons in Rawang.

His daily responsibilities include sending and picking up his wife who works in Subang Jaya.

His Valentine Day message to all: Never give up on love, especially when it comes to loving yourself and reaching your potential.
Posted by ILTC MALAYSIA at Thursday, February 14, 2008