College helps community in its own way

Friday April 18, 2008
College helps community in its own way
By JADE CHAN 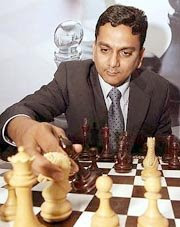 AFTER personally experiencing a robbery followed by a long post-surgery period, Masterskill College of Nursing & Health CEO Edmund Santhara realised how important physiotherapy was and discovered that was a severe shortage of physiotherapists in Malaysia.
“I learnt that the most important part of surgery are the post-surgery procedures because if that’s not done properly, you may lose 20-25% of your ability to recover fully.
“This is when you go to physiotherapists and undergo a rehabilitation process. Things that we take for granted, like using a fork and spoon or writing, have to be relearnt.
“Most physiotherapy centres in Malaysia have a severe shortage of qualified staff.
“The longer it takes, the stiffer your limb becomes and the more painful it is to do physiotherapy,” he said.
Santhara decided to look at the social aspects of helping people and how Masterskill could be a nation-builder in their own way. Masterkill’s physiotherapy project began as part of its corporate social responsibility (CSR) initiatives when they collaborated with the Malaysian Paralympic Council to support the KL’06 Fespic Games. 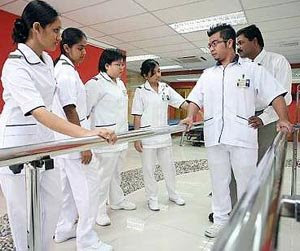 Keeping focussed: Students practising under the eyes of a lecturer.
After the Games, Masterskill launched its physiotherapy learning centre, named the McMillan Physiotherapy Centre, at their main campus in Taman Kemacahaya, Cheras. To contribute more effectively and to better serve the community, Masterskill also invested RM4.5mil to set up a physiotherapy research centre at Bandar Mahkota Cheras, Sungai Long.
“We found that it was difficult for people to come to our campus due to the lack of public transport, so we decided to open our physiotherapy research centre,” Santhara said.
“Our definition of commercialisation is that it’s open to the public but we won’t charge for the first three years except for a RM1 registration fee. “The physiotherapy centre in Sungai Long has been in operation since January and we’re looking into providing services for at least 500 patients,” he said.
The centre operates like a clinic and provides treatments for common injuries a general worker will usually have and general physiotherapy. 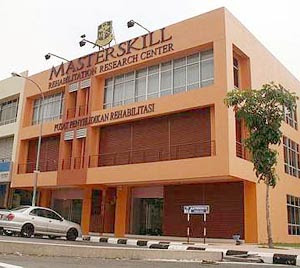 “We have 32 physiotherapy specialists, clinical instructors and a thousand over physiotherapists being trained – some of whom will be full-fledged physiotherapists six months from now,” Santhara said.
“One of the best ways to expose them, other than at hospitals, would be at our own centre,” he added. One of the project’s aims, he said, was to use the resources Masterskill had as they were presently the biggest physiotherapy school in Malaysia.
“We want to expose the students not only to clinical expertise, but how to manage a physiotherapy centre and teach them entrepreneurial skills. “It’ll also be a place where those that have be sent for training at hospitals can impart their knowledge and for our lecturers to have clinical experience to have a high level of skill-based experiences.”
Masterskill continues to provide training and development facilities to the physiotherapy community to enhance their skill and knowledge by, among others, developing a physiotherapy degree programme for qualification upgrade purposes, pledging scholarships and RM250,000 grants for knowledge development and bringing field experts to conduct seminars and workshops.
Their collaborations with Chettinad Hospital and Research Institute, India, and La Trobe University, Australia, offer additional training for students and allows for exchange in terms of knowledge and clinical experiences. In the pipeline are plans to open physiotherapy centres nationwide, with one in Sungai Petani, Kedah, in three months.
StarMetro will be featuring a series of stories of community works for the StarBiz-ICRM Corporate Responsibility Awards, which recognises and honours companies that demonstrate outstanding corporate responsibility practices in the different aspects of their business operations.

I am 35years old home maker. I hv 3 children, 9yr, 7yr and 7months. But after seeing my dear grandmom being lying on the bed 24hr since a yr ago until now, i feel helpless & angry wth myself. I want to learn physiotherapy to help her and as well to help other elderly in my home town. We don hv private OT center here (only in public hospital wth language problem n no home service.)
My question, how can I pursue from here..i was thinking of postgraduate or best to hv short course at public hospital or workshop organise by MASTERSKILL.

Hope to hear from u soon.