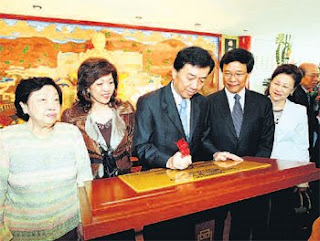 GENTING HIGHLANDS: The late Tan Sri Lim Goh Tong had set aside RM9.5mil to be donated to various medical, educational and charitable organisations before he passed away last October.

Yesterday, his family members presented cheques to the beneficiaries in conjunction with the launch of the Lim Goh Tong Memorial Hall here.

His son Tan Sri Lim Kok Thay said although his father was not physically present at the event, his legacy lived on.

“We want to cherish all the good memories of a great man and celebrate his lifetime legacy of achievements, year after year,” he said, adding that the event was held on the birth date of senior Lim.

“Genting Bhd and Asiatic Development Bhd have also proposed the establishment of two special endowment funds of RM1mil each for Universiti Malaya and Universiti Putra Malaysia, respectively,” he said.

Kok Thay said another RM2mil was donated to Yayasan Lim, a family foundation which Goh Tong set up in 1978 to contribute regularly to medical and educational institutions, old folks’ homes and other charitable organisations.

“Meanwhile, Genting Bhd will present RM500,000 to the Malaysian Institute of Management to continue our support towards the MIM library known as the Genting Group Resource Centre,” he said.
Posted by ILTC MALAYSIA at Sunday, April 06, 2008

we are from Malaysian Parkinson's Disease Association and we would like to apply for donation from the Lim Goh Tong Charity Fund. Could you please email me their addressee and the address so that we can write to them.