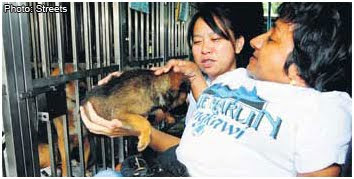 Petpositive Member Carol Rasiah who has brittle bones, is fighting for her life at the Intensive Care Unit in University Hospital Medical Centre (PPUM).

The story was broken to us by another Petpositive Member Stanislaus Anthony from Petaling Jaya earlier this afternoon.
Carol who hails from Subang Jaya was reported to have been traveling in a wheelchair-friendly van called Mobility on Tuesday morning when the accident happened.
She is reported to have fallen off her wheelchair when the van made an emergency stop.
Carol who suffered internal bleeding was rushed to the trauma ward on the fifth floor of PPUM where she is still in a coma.
One visitor who saw Carol at the hospital yesterday described her condition as extremely serious. She didn't think that Carol would be able to pull through.
According to her, doctors were waiting to perform surgery on Carol but were being prevented from doing so because she was not in a stable condition.
However at least one Web Forum where Carol regularly chats was more optimistic and hopeful that Carol would recover from her ordeal.
Carol has taken part in several activities of Petpositive to date. They include attending our historic charity concert in June 2007, our Xmas party by Mid Valley Megamall and a special animal-assisted therapy session at the Selangor SPCA last year.
The last we saw Carol was at MBPJ's Dog Forum in PJ in October where she had also traveled in the Mobility Van."Despite being in a wheelchair for all her life, Carol is always cheerful," noted Lynda Merican, special coordinator for Petpositive. "
She would be present at some of the functions I attended and it was always great to bump into her," concluded Lynda, wishing her a speedy recovery.
Many in the disabled community have expressed shock at what had happened to Carol and have called for more improved safety measures for all vehicles that transport disabled and elderly persons.
This should include special training to drivers of special vehicles that transport vulnerable communities.Carol who lives behind The Summit in Subang is active on Facebook and is also a blogger.
Her address is http://blogsportcom-carol.blogspot.com/
Posted by ILTC MALAYSIA at Friday, November 27, 2009