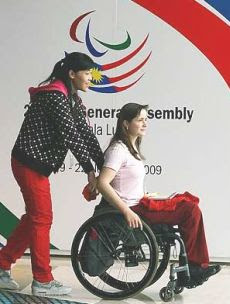 “This is in recognition of Malaysia’s capabilities in championing the paralympic movement,” he said.

Asked whether Malaysia would host the Paralympic Games, he said that if the country were to do so, it would have to be chosen for the main Olympic Games, “which is a tall order”.

“It will not happen in the foreseeable future. You have to be a strong sports nation, make an impact and be a force to be reckoned with at the global level to be considered,” he said at the opening of the 14th International Paralym­pic Committee general assembly and conference here yesterday.

The United Nations estimates that there are about 500 million persons with disabilities in the world, the majority in developing countries, he said.

“The marginalisation of persons with disabilities is prevalent and in many countries there are few sports opportunities available to them,” Najib added.

On a brighter note, he said there had been increasing support for the participation of persons with disabilities over the past 20 years.

In line with the 1Malaysia concept of “People First, Performance Now”, Najib said it was important to provide opportunities for people from all walks of life, regardless of race, culture and religion.
Posted by ILTC MALAYSIA at Tuesday, November 24, 2009