Changes for the better

Changes for the better

The needs of the disabled and their caregivers are finally receiving some attention.

The first happened in a community hall in Section 3, Petaling Jaya, where a group of nearly a hundred – mostly parents and caregivers of the handicapped – attended a half-day forum on how to be more effective in their roles.

It was part of a community-based rehabilitation exercise organised by Taman Medan assemblywoman Haniza Talha.

This workshop was special for several reasons. First, it was targeted at parents and caregivers of disabled persons. The pillar of strength for the disabled, this group has been largely invisible to the public, the media and the Government.

Not enough attention is being given to those who endure hardship in raising a handicapped child. Quite a few have to cope on their own with two or even three disabled family members.

Before the event began, I went around the hall and spoke to some of the parents. 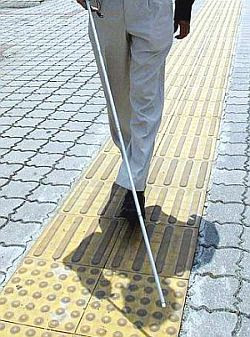 Blind trust: The blind are easy targets for crooks. It is difficult for them to distinguish between a genuine law enforcement officer and a con man.

I was shocked to discover that they had little support or information on how to bring up their disabled kids even though they had access to specialists and lived in a vibrant city like Petaling Jaya.

Clearly those involved in rehabilitation medicine need to change their present method of treatment in hospitals and find an effective way to reach their patients in their own homes, like what is being done in outreach programmes in many countries.

I was especially delighted when I learned that Haniza was planning to set up a support group for poor parents in her constituency so that they could come together and share their resources.

The speakers at the forum were disabled persons with various handicaps.

A tetraplegic shared how he overcame depression and suicidal thoughts after he became handicapped following a road accident.

He spoke about how his mother eventually changed her negative perception when she saw him helping other people in a similar situation.

Another highlight was a presentation by a rehabilitation doctor who showed slides of aids available to the handicapped in Malaysia, in the form of special wheelchairs and shower equipment.

Many of the participants were seeing such things for the first time.

They told me later that they were greatly encouraged by the disabled role models who spoke about their experiences.

Meanwhile, disabled Malaysians who are worried about personal safety will soon have a reason to smile, following a special meeting between representatives of the disabled and the police force.

About 30 people – 10 of whom were top brass from the police force while the rest represented people with disabilities – met at the Jalan Travers police station in Kuala Lumpur last Wednesday.

Arranged by the National Welfare Department, the meeting was a follow-up to the one held in October last year. I wasn’t at the meeting but several physically-disabled activists who were present told me that it was very promising.

The police force was once again briefed on the problems faced by the disabled community in matters related to crime and protection.

These included the difficulty the blind have in distinguishing between a law enforcement officer and a crook pretending to be one.

One disabled woman related how she was robbed in broad daylight at a centre for the disabled, by machete-wielding assailants. She was in a state of shock and called the police, only to be told to “come over to the station to make a report”.

In a recent incident, a middle-aged man in a wheelchair was kicked by an assailant in public. Charges have yet to be filed against the offender.

The issue of wheelchair accessibility was also raised. Those who came in wheelchairs found the ramps in the newly-built police station, to be too steep. They couldn’t wheel themselves up without assistance. The ramp was also partially blocked by a flower pot and a signboard stand.

The lifts had no Braille buttons and no voice activation. The so-called handicapped-friendly toilet had hardly any room for manoeuvring. The grab bars were all fitted wrongly and the toilet did not have sliding doors.

As for the car parks, they were too far from the entrance. Disabled visitors are forced to negotiate oncoming traffic to get to the building which is located across the disabled parking lot.

The police promised to look into the complaints straight away.
Posted by ILTC MALAYSIA at Monday, March 29, 2010