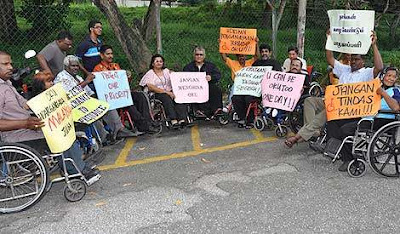 Armed with placards that read 'Jangan Menghina OKU' (Don't insult Orang Kurang Upaya) and 'You can be OKU too', the group from the Independent Living and Training Centre (ILTC) called for immediate action to be taken against the Komuter train driver.

Karuppannan Veeramalai, 57, (left) who works at KTMB train stations as a contractor-in-charge of toilet services, said that he was kicked and assaulted by the Komuter train driver, known only as 'Zul', over a parking incident.

According to Karuppannan, he has been working at the station for the past 15 years and has been 'bullied' by KTMB staff for the last three.

Things finally came to a head when Zul allegedly kicked and attempted to slap Karuppannan over the latter's son's car being parked next to a parking space reserved for the disabled.

Karuppannan said he lodged a police report at the Subang Jaya police station on March 5 but added that to his disappointment, no action has been taken against the person he identified as 'Zul'.

He claimed it was not the first time that he was bullied by the KTMB Komuter train driver.

Representing the NGO Malaysians Against Discrimination of the Disabled, Anthony Thanasayan called on the inspector-general of police to investigate the matter.

"The rights and dignity of all disabled persons must be respected at all times," said Thanasayan (above, right).

Asked about the incident, KTMB Corporate Communications Acting Senior Manager Mohd Fazil Ismail, who was at the scene, claimed that the KTMB had not been aware of the incident.

"Now that we know about the matter, we will bring the matter up at the KTMB headquarters and hold a domestic inquiry. We will respond to this case within seven working days," he said, adding that he had turned up at the venue of the protest today to personally handle the complaint.

Mohd Fazil said the issue should not be construed as proof of KTMB's ill-treatment of the disabled and that it could perhaps be just a private disagreement between two individuals.

The protest, which attracted about 20 people, was also attended by Independent Living and Training Centre (ILTC) president Francis Siva and its secretary Gurdip Kaur.

Meanwhile, all Komuter train stations will be fixed with closed circuit television cameras (CCTVs) beginning this year for security reasons.

Bernama reports that KTMB President Dr Aminuddin Adnan said for a start, nine stations with a 'high-risk potential' would be installed with the CCTVs.

He said Komuter stations would also be fixed with WiFi connections, fans, water coolers, LCD screens and mobile phone chargers with a RM2 million allocation.
The facilities will cater for the needs of Komuter train passengers which have risen from 95,000 a day last year to 96,000 this year, he told reporters at a separate event.
Posted by ILTC MALAYSIA at Wednesday, March 10, 2010