By THO XIN YI

All 12 local councils in Selangor will soon have a standard set of guidelines for keeping pets.

Selangor state health, estate worker’s affairs, poverty eradication and caring government committee chairman Dr Xavier Jeyakumar said the current guidelines for each council differed to some extent.New rules: The workshop was not focused only on dogs but discussed ways to deal with other animals as well. 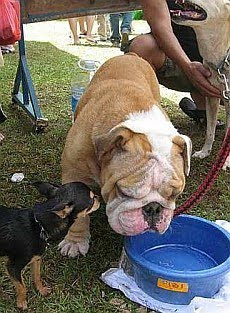 Dog owners in Shah Alam, on the other hand, pay RM10 for the licence while retirees pay RM5. It is free of charge for the disabled.

“We are getting all the relevant authorities involved together to try and streamline the regulations, with consideration given to the sensitivities in different areas,” he said.

A workshop was held at the MPSJ yesterday to get input from council officers and NGOs on pet-related problems.

The discussions at the Effective Handling of Abandoned Animals and Pet Keeping in Selangor Workshop were not restricted to dogs only but encompassed all animals.

“For example, there were complaints about the monkey menace in certain housing areas.

“The NGOs are against shooting the animals but the question of who is responsible to catch and pay the bills needs to be addressed,” Dr Xavier said.

MPSJ secretary Slamat Hamzah said there were always different voices coming from the animal lovers in the NGOs and the public when it came to problems created by pets and stray animals.

Petaling Jaya city councillor Anthony Thanasayan, who also chairs the MBPJ Canine Advisory Team, added: “While the NGOs want to save the animals, the local councils are trying to create a safe environment for the people to live in.”

He said he initiated the workshop to share CAT’s experiences with the other councils.

A working paper would be prepared following this workshop and would be forwarded to the state government and the Selangor Economy Action Council (MTES).

On the plan of having a modern pound in Selangor, Dr Xavier said the Sepang Municipal Council (MPSp) would be given land measuring between 1.2ha and 2ha for the pound.

He added that the authorities had checked on the pounds administered by the Klang and Selayang Municipal Councils, which had drawn criticisms from NGOs.

The pounds have been cleaned and veterinary department officers were called in to treat the sick animals.

On the dengue outbreak that has claimed the lives of six people in Selangor in January, Dr Xavier said there was a slight decrease in the number of cases.

“This is a good sign but we still have to be on guard. The people have to play their part by keeping their compounds clean and free of mosquito-breeding grounds,” he said.