Shame On You Mr District Officer For Slamming A Quadriplegic!

Shame On You Mr District Officer For Slamming A Quadriplegic!

aNt's aNgle: So it appears as if the Gombak district land office is fighting back now. 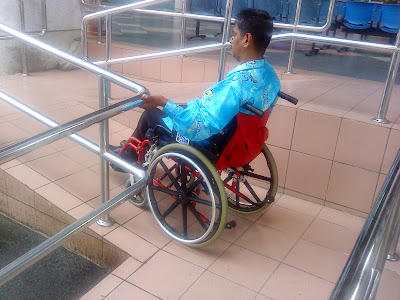 According to StarMetro, the district land officer is finding faults with Independent Living and Training Centre (ILTC) president Francis Siva over his so-called "aggressive approach" when he dropped by the building last week.

He is quoted by the newspapers as not only "wanted to show his power" but "protesting for his own personal reason."

It is so easy for insensitive non disabled people to quickly label the handicapped as trouble-causers, is it not? Particularly for people who refuse to be mollycoddled and insulted about their disabilities.

What kind of "power" does Francis wield, one wonders? Especially when you consider that he is paralysed from his neck down. He can't put on his clothes by himself and requires able-bodied people to carry him from his wheelchair to his bed and everywhere else.

If you ask me, if anyone deserves an award (such as a Datukship) it is Francis. It is simply amazing how this individual - who was an able-bodied person until an accident changed his life forever - has been helping other more disadvantaged persons than himself.

If Francis was only interested about his personal matter as the now, most dishonorable district officer put it, he would have done only just that. Instead he and his team went and checked out the entire facilities and found it to be a farce.

By that I mean, giving the impression that the disabled's needs have been taken care of when instead what they had done was simply appalling.

I wonder why it took as long as five years (this is when the 'disabled-friendly features' were installed) before they got to realise that women with disabilities had no access to the public toilet.

Did they expect them to wear diapers and somehow 'manage' every time someone came over to the the land office?

Would any able-bodied woman accept that for themselves?

What was also most unprofessional of the land officer was that he chose to disparage Francis even without meeting him first. He also did not bother to find out what had happened from the aggrieved party before the department decided to launch their attack against the ILTC.

Then of course, the most surprising thing. Francis and his team met up with the district officer on Friday. Apparently that meeting was more congenial.

According to Francis, the district officer denied saying anything negative about the ILTC - which was highlighted in Sinar by then. He is said to have expressed his regret over what had happened and said he wanted to do everything he can to make things right.

He even went on to the point of saying that action would be taken against the front-desk staff who mistreated them.

According to Francis, the district officer said that he would be giving up his car park for the handicapped.

Now this all looked very good until the report in The Star the next day.

So one can understand why the disabled community would view the district officer's statement as nothing but empty promises.

DO, shame on you for conducting the press conference against the ILTC. This is not the way forward neither is it the way to respond to issues of people with disabilities.

The Gombak Districk Office should come clean and apologise to Francis and his intrepid team of wheelchairs for launching a press conference against them.

This is the only way forward and the way to work together.

aNt
PET+BLOGSPOT
PET+BLOGSPOT is the official online blog of the Malaysian Animal-Assisted Therapy for the Disabled and Elderly Association (Petpositive).
Posted by ILTC MALAYSIA at Sunday, May 23, 2010