He said Francis was not happy over RM50 charged as quit rent annual fee for the ITLC land in Rawang.

“He made an appointment last week but instead protested vehemently. Francis wanted his quit rent to be reduced from RM50 to about RM5. So, he went to the reception demanding to see me on the matter.

“At that particular time, I was in a meeting outside of my office. The following day, I went to the hospital to do a stress test. 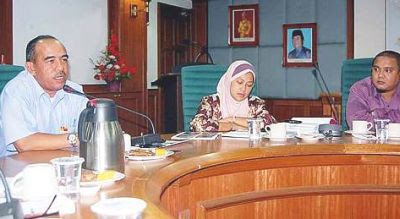 “My staff helped him but he insisted on seeing me. They told him that I was not in the office on that day.

“He (Francis) just wanted to show his power and was protesting for his own personal reasons,’’ Zaharin said.

In another development, Zaharin admitted that the facilities for the disabled at the 30-year-old Gombak Land Office, were not up to standard and needed to be improved.

“Currently, we do not have the budget for making improvements. Moreover, this building is shared with the Gombak Public Works Department. It is not our own,’’ said Zaharin, during a press conference at his office.

Last week, about 15 disabled people held placards and protested over the lack of facilities at the Gombak Land Office in Selayang.

The group comprising members of ILTC and Malaysians Against Discrimination of the Disabled (MADD) claimed that the ramp for the disabled was too steep.

They added that there were no proper toilet facilities for disabled women while the staff at the information counter were unfriendly and that the employees were rude.
Posted by ILTC MALAYSIA at Saturday, May 22, 2010