Disabled trader finally gets her licence

Disabled trader finally gets her licence

AFTER waiting for six months, Cha Seak Nee, who is wheelchair-bound, received her licence to trade at the Taman Megah wet market on Monday.

The 39-year-old said she had applied for the licence from the Petaling Jaya City Council last year when the market opened for business.

She went on to trade at a stall for the disabled without a licence while awaiting approval. 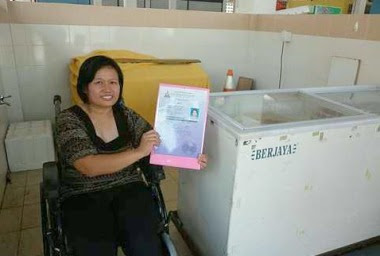 Happy at last: Cha at her stall in Taman Megah wet market with her trading licence she received on Monday.

However, last month, she said MBPJ officers came and asked her to move to a different lot at the vegetable and fruit section.

“They said the consumers had complained the walkway near those stalls were narrow and unsuitable during peak hours,” said Cha, who sells frozen food items.

She was still unsure if she would be able to retain her lot because the council would be meeting again this week to finalised the matter but Cha was happy that she was now a legal trader.

Petaling Jaya city councillor Anthony Thanasayan said Cha had been harassed by traders and a councillor over her move of not wanting to give up her lot as it was built for disabled people near the ramp.

“It is not the job of a councillor to do that and what that has happen to Cha should never occur again,

“It is not easy for a disabled person to come out and fight for her rights especially in a society like ours with people trying to victimise her,” he said, adding that as councillors they should always be on hand to help the less fortunate.

While Independent Living and Training Centre president Francis Siva said he was glad that the group managed to get Cha a future to look forward to now.

“Don’t destroy our life because we all have equal opportunities,” said Francis whose centre helps train the disabled in various skills and prepare them to face the challenges they might encounter when they enter the working field.

Damansara Utama assemblymen Dr Cheah Weng Yin, who visited the market, said the Selangor government did not discriminate against the disabled community.