LATEST: Disabled hawker received her license this morning from MBPJ! 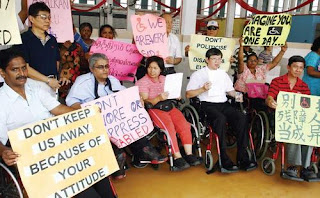 WHAT an unbelievably action-packed seven days it was last week!
It was also a goldmine of learning experiences not only for me but for all the people involved.
Recall the incident of the five hawkers – one of them in a wheelchair – in the Taman Megah market in Petaling Jaya who were forcibly told to shift from their legally gotten slots that I wrote about last week?
Well that episode saw a total of three press conferences, including the making of police reports last week. 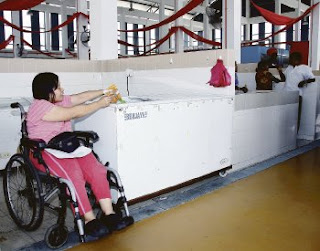 It was wonderful to see how the media and members of the general public turned up in support of the disabled woman named Shirley. The head of the resident’s association in her area also backed her fully.
The nearly forty-something woman is a true epitome of courage for anyone who is physically challenged.
Realising that she could no longer depend on her loving ageing parents, she took a giant leap towards independence by moving out of her home and renting a room near the market.
One of her previous landlord evicted her because she claimed that Shirley was bringing “back luck” to her home. 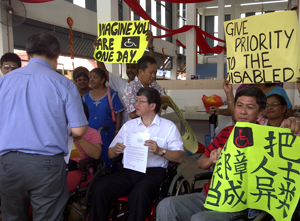 In her present place, Shirley needs about two hours to get ready in the mornings. She has to wheel herself with the strength of her arms for about 15 minutes through heavy traffic to get to her stall at 7am where she sells frozen stuff.
She has to do this six days a week for half a day through rain or shine.
There have been many times when she was totally drenched because she is not able to hold an umbrella and push her wheelchair at the same time.
On a good day Shirley can make about RM15 a day. On bad days, only RM6.
In appreciation of her real difficulties, the Petaling Jaya City Council (MBPJ) decided to put her in a slot that was made specially for wheelchairs. It is next to the ramp to make it easier for her to access her lot. 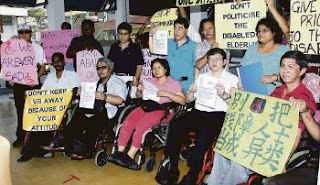 However, it shocked me to discover the sort of excuses made by some unscrupulous elements just to get Shirley out so that they could occupy her place.
One of them was that the disabled toilet would be nearer to her if she shifted to the back. The fact is she has no problem where the toilet is now so why should it be an issue for anyone else, especially persons without disabilities themselves?
How would people who are not in wheelchairs know what is good or not good for people who are in them?
Another ludicrous suggestion is to break up the disabled-friendly slot and rebuild it at the back. Not only is this a total waste of tax-payers money but why put something in a place where the disabled doesn’t want it?
Wouldn’t it be better to use that good money to add another hawker market handicapped friendly?
This smacks of nothing but sheer arrogance on those behind this idea, if you ask me. 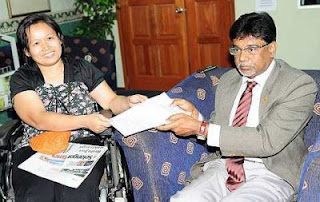 On a more positive note, good sense finally prevailed when about 15 disabled people turned up together with Shirley at Selangor Exco for a Caring Government Dr Xavier Jayakumar office on Monday last week.
He wisely directed that the status quo be maintained for all of the victimised hawkers.
Dr Xavier also kindly treated all of them to a good lunch at his office in good gesture as his department’s way of empathizing with their difficulties. 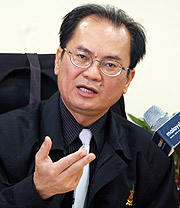 His sentiments were further echoed by the chief of all local councils in the state Ronnie Liu two days later who said the rights of minorities, especially the disabled should be protected at all times.
“People with disabilities not only need support, they also need an extra helping hand if they are to survive in a society that still largely doesn’t cater to their needs,” he told Wheel Power last Wednesday in his office at the state secretariat building in Shah Alam.
On a lighter note, I was in a couple of places also last week checking on wheelchair accessibility through my experience as chairman of MBPJ disability technical committee.
The first was Kelab Syabas swimming pool in Section 52 which is under my zone as MBPJ Councillor.
We managed to zero in on doors that weren’t suited for wheelchair-users in the shower rooms and steep ramps. The management promised to rectify them soon.
Mid Valley Megamall was the next stop.
The management’s staff and I managed to cover a lot of ground with some promising things to come in the near future in what is my favourite mall.
We had a hilarious ending when we came across a non disabled woman in a disabled-friendly toilet. She rushed out red-in-the-face with embarrassment to a dozen disapproving eyes.
I bet she won’t be caught doing that ever again!
The End
Posted by ILTC MALAYSIA at Monday, March 14, 2011