THE celebrities whose cake creations were selected in the Celebrity Cookout Charity Initiative reality television programme last year have raised RM100,000 in total for five good causes from the sale of their delectable confections at Secret Recipe outlets.

A chocolate and strawberry treat created by Amber Chia and Carmen Soo that they named “Tender Loving Care” raised the most funds – RM30,000 – for the duo’s chosen charity, The Independent Living and Training Centre (ILTC).

“Both Amber and I are independent women and we thought, what if one day something were to happen to us and we became helpless?

“So we figured it would be nice if we could help the ILTC as these people, though disabled, are trying hard to be independent,” Soo said at the cheque-presentation ceremony.
ILTC president Francis Siva exp-ressed gratitude to the two celebrities for doing their best for a noble cause. 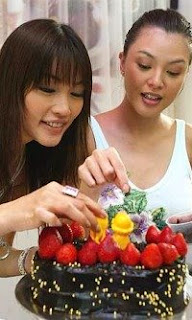 “We are dedicated to training residents to be responsible, useful and productive despite their disabilities. It's not easy, but this money will go a long way towards funding the construction of a new centre that we can call our own,” he said, adding that the rented premises that the centre was occupying housed 158 residents aged between 18 and 55.

Winning creation: Chia (left) and Soo putting the finishing touches to their cake during the Celebrity Cookout.

Deputy Women, Family and Community Development Mini-ster Noriah Kasnon handed over the mock cheques to representatives of the charities.

“Charity projects such as this showcase the business community's caring and sharing spirit, which is in line with the ministry's vision of creating a caring and developed society.

“This charity initiative has set the platform for other organisations to follow suit,” Noriah said.

She added that the proceeds of the charity drive would lessen the burden of the organisations, especially in view of the rising cost of medication and cost of living in general.

Secret Recipe Sdn Bhd chief executive officer Datuk Steven Sim felt the project had been an enjoyable and rewarding experience for everyone involved.

“It is heart warming to see this project being pieced together from scratch.

“We also hope that our customers are now more aware of the five selected charity organisations as our outlets had carried pamphlets on them when we sold the cakes between October and December last year,” Sim said, adding that for each cake sold, RM10 was channelled to the charity fund.

The charities that benefited were World Vision that works with children, families and communities to overcome poverty and injustice; Prihatin, which provides support and shelter to single mothers and children infected with HIV/AIDS; Yayasan Anak Warisan Alam, whose mission is to spread the environmental message to educate the young on nature and heritage through conservation projects, and Persatuan Anak-Anak Yatim dan Ibu Tunggal.
Posted by ILTC MALAYSIA at Saturday, April 19, 2008