Activists Protest Against MACC - malaysiakini
Malaysians Against Discrimination of the Disabled (MADD) demanded the Malaysian Anti-Corruption Commission to apologise for its insult on veteran lawyer Karpal Singh. They want its chief, Abu Kassim Mohamed, to issue a public apology to the DAP chairperson and to all disabled persons for the uncalled for remarks by its counsel at an inquest recently. MADD, an umbrella body for eight groups, handed over a memorandum to the MACC at the Federal House in Kuala Lumpur today.
It called for strict disciplinary action against MACC lawyer and representative Abdul Razak Musa who insulted Karpal, the legal counsel in the Teoh Beng Hock inquest last Friday.
During a verbal exchange on Thursday on an application to cite a MACC officer for contempt at the Teoh's inquest, Abdul Razak retorted: "I can sit down but Karpal cannot stand up." Musa later apologised and withdrew his remark.
A group of disable activists from MADD, led by Anthony Siva Balan Thanasayan and Francis Siva waited at the entrance of the MACC office for Abu Kassim to receive the memo.
However, not a single MACC officer appeared. A representative from the Soil and Minerals Department emerged after 30 minutes and asked the group to go up to the fifth floor to the MACC office.
MADD legal advisor N Surendran said: "Their insensitivity to the disabled is appalling. MACC officers are up there, they can't come down, they want these people to go up." 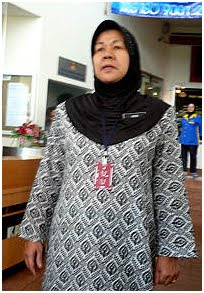 Surendran said that as the group faced difficulties in traveling to Putrajaya, they had contacted Abu Kassim to inform him of their intention to meet him at the KL office.
The group had to wait another 15 minutes before a MACC officer identifying himself as Khamswan emerged and offered to receive the memo on behalf of his office.
Asked why Abu Kassim could not receive the memo despite being given prior notice, Khamswan said: "The commissioner's office is in Putrajaya, not Kuala Lumpur."
The group refused to budge and insisted on handing over the memo to the MACC director.
Eventually, federal director of the MACC, Azni Hamzah (above), came down to accept the memo
Anthony, who is also a Petaling Jaya city councillor, was unhappy at the way the group had been treated.
"An insult to all disabled people"
"Is this what a caring society is? You don't even care to take a piece of paper from somebody. We are not asking anything from anybody, we're just expressing ourselves," he said.
"This is the worst. In parliament (during a previous protest) we had officials who came to see us and told us which way to go," he added.
Surendran (left) later explained that the disabled groups felt strongly about Musa's insult because previous protests on similar discrimination had fallen on deaf ears.

"The insult on Karpal's disability is not an insult just to Karpal, but to every disabled person in this country.

"If people in authority like Musa and the MACC do not know how to respect the disabled, what example are setting for the rest of the country?" he asked.
"An apology is not enough because every time they insult the disabled, they apologise and let the matter rest, which is what happened the last time Karpal was insulted," he said.
Posted by ILTC MALAYSIA at Tuesday, January 19, 2010